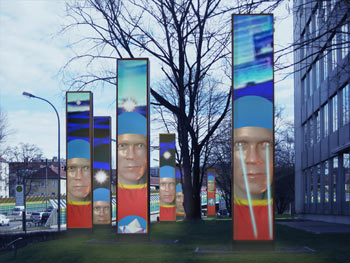 This art project marks OSRAM's first cooperative effort with the information radio station B5 aktuell, which will provide the material for the art installation. With the help of sound and speech recognition software, the artist will generate image and text sequences in real time from the current program of the information radio station B5 aktuell.

Bjørn Melhus thinks far into the future with regard to both artistic contexts as well as technological concepts. The visual program sequences for Screensavers were developed and created together with specialized programmers. By means of a software program, the words spoken on the radio are partially transformed into image and text sequences that then appear on the stelae. In the case of a few predetermined key words - such as "art," "catastrophe" or "traffic jam" - additional image and text sequences that provide visual comments on the spoken words are triggered. Comic book heroes, the Screensavers, appear on the SEVEN SCREENS during the brief presentation breaks.

Ivo Wessel, Rainer Kohlberger and Mike Orthwein developed and made the visual realization of the project possible.

With his most recent work the artist reacts to the installation's site. The Mittlerer Ring in Munich is a very busy road and approximately 90,000 automobiles pass by the light stelae each day and with them a great many viewers, whose common public space is not a visible but audible one – the radio. If television connects millions of living rooms with each other, then it follows that the mass media specific to driving is the radio. This thought serves as his starting point when Bjørn Melhus makes the radio the basis of his media reflecting, critical and artistic work, the Screensavers.

Bjørn Melhus lives in a media-driven culture, as an analyst, protagonist and – like us all – a consumer. In his work, unlike other artists, he deals with the stocktaking of media-cultural creations, such as film and television, and thereby scrutinizes the reciprocal relationships between the individual, the masses and the medium. A recurring motif is the double (Superhero), the reproduced individual who is always embodied by the artist himself.

BJØRN MELHUS
Bjørn Melhus was born in 1966 in Kirchheim/Teck. Bjørn Melhus studied creative art from 1988 to1997 at the HBK in Braunschweig. He has received a number of scholarships, including ones from the DAAD at the California Institute of the Arts in Los Angeles and from the state of Niedersachsen at the ISCP in New York. He has had solo and group shows in New York, Denver, Los Angeles, Paris, Tokyo, Kyoto, Moscow, Milan, Madrid, Zürich, Amsterdam, Stockholm, Berlin, Hamburg, Frankfurt and Munich. Bjørn Melhus has been a professor of fine arts and virtual realities since 2003 at the Kassel Art Academy. He lives and works in Berlin.

Dr. Christian Schoen, director of the OSRAM ART PROJECTS, is a renowned art historian and critic.

More information is available at: http://www.osram.de/art/sevenscreens 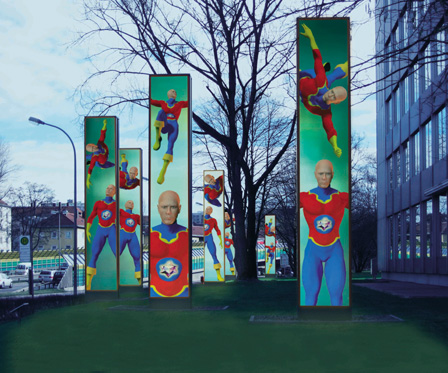